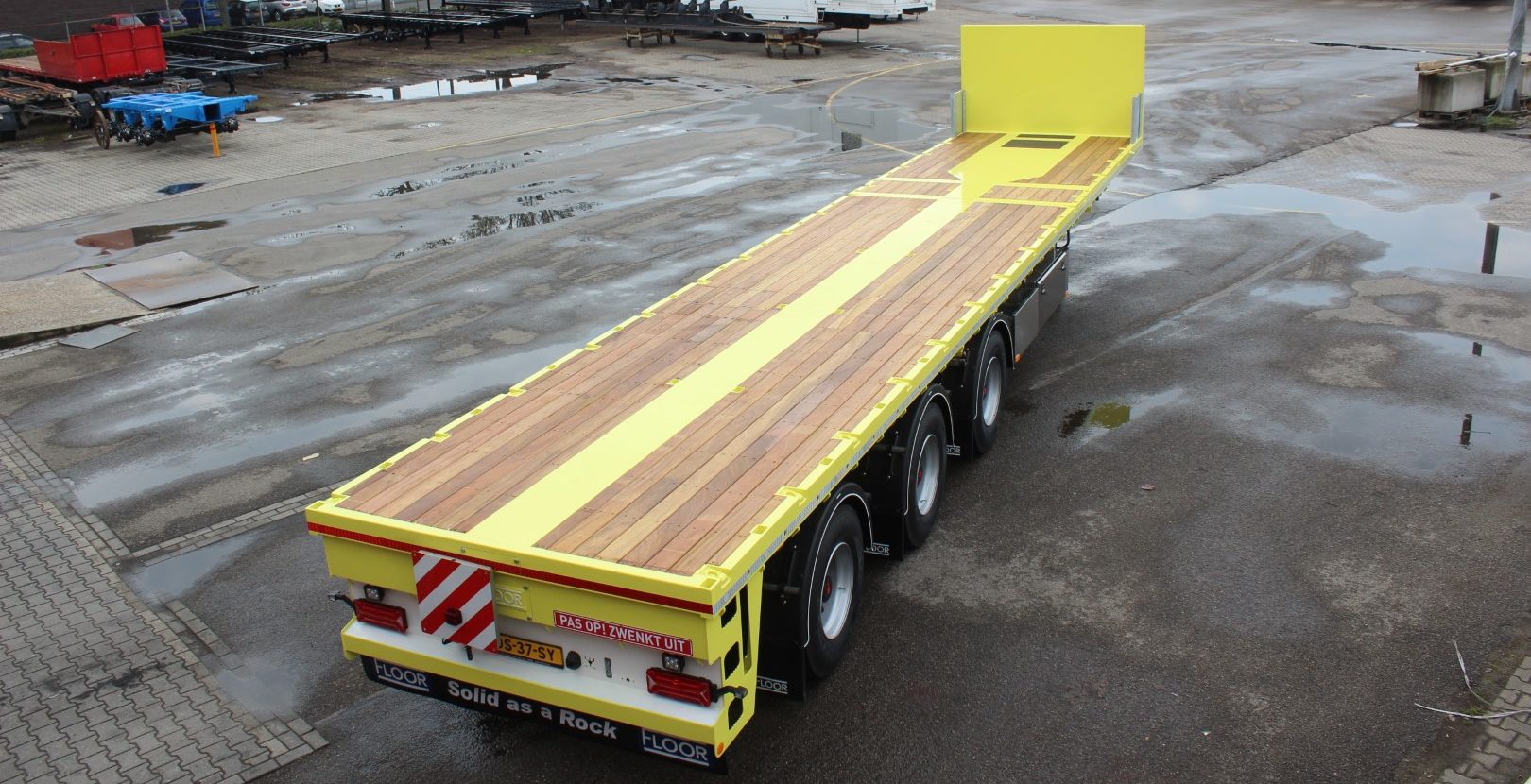 The pronounced yellow extendable Floor semi-trailer for the Lokhoff company from Schijndel in Brabant, has been manufactured by Pacton Trailers in Ommen.  This colour for their business operation can partly be explained by its use on and along the road.  This is the first semi-trailer combination for Lokhoff which allows them to transport and place long lighting columns independently.

The Lokhoff company from Schijndel in Brabant specialises in the delivery and installation of temporary and permanent illumination of roads, as well as the lending out of electric power generators.  Due to their innovative method of operation, they are capable of supplying large working areas of light in a short span of time.  Furthermore, Lokhoff assembles and disassembles signposts along and above highways.

The special small trucks of Lokhoff enable them to place temporary road lighting during daytime instead of overnight.  There is also no need to close off any lanes.  Furthermore, the lean rigids can easily be utilised in tunnels.  The employees of Lokhoff are experienced and trained in working both goal-oriented and efficiently.  A team that places temporary road illumination, puts up around 50 masts a day, which come down to approximately 2,5 km.

Lokhoff has recently acquired their first truck and semi-trailer for their own fleet.  Gertjan van de Braak of Lokhoff says that they combine the new Pacton/Floor semi-trailer combination with a new MAN truck with a 52 tonnes/metre mobile craner.  He adds that until now, their fleet has consisted of rigids only of which they have eight.  This has been restrictive when it comes to the transportation of large volumes and especially lengthy material.  They tend to use their special thin rigids where possible, but that the semi-trailer combination is the solution for the transportation of larger volumes or high light posts.  He explains that their permanent light posts are 20 metres in length and that they outsourced  the transportation thereof in the past.  According to Van de Braak they are more flexible now and they can utilise the semi-trailer combination to the maximum, both during the day and at night.

The extendable Floor semi-trailers are constructed according to a long-term tried and tested method, with a specific construction of the sliding mechanism.  A Floor semi-trailer can be recognised in an instant by its appearance.  The well-known support beam with its integrated light boxes as well as the stairs on the side, testify to the Floor-quality.  The basic length of the semi-trailer for Lokhoff, is 12,5 metres, for the combination of a truck with a mobile craner.  Adding to the length, it can be extended by 7,95 metres.  A customised intermediate table of 90 cm has also been supplied to be used in conjunction with a shorter truck.  The semi-trailer engages the pneumatical locking system of the beam in steps of 500 mm to extend the semi-trailer.  The front and rear are aligned with pins and links underneath the side raves.  The triaxial, steered semi-trailer (FLUO-18-30H2) with a height of 1,46 m has a maximum load on the kingpin of 18,000 kg, an axle load of 30,000 kg and a gross vehicle weight of 48,000 kg.  The second and the third axles of the SAF air-spring system are steered by means of the turntable, using the Tridec HS steering system.  The front axle is a lift axle with a Tritronic remote control and an automatic alignment system, which offers Lockhoff flexibility in confined spaces.  The semi-trailer has been fitted with LED lights all round and has a full 28 mm thick hardwood floor as well as a fixed steel bulkhead of 5 mm thick and a height of 1,500 m.  Aluminium sideguards have been realised for the axle bogie, according to EG specifications.  Heavy duty rope hooks have been placed 500 mm apart under the side raves.  The zinc coated and perforated open storage box has been assembled across underneath the semi-trailer.  The two stainless steel boxes have been fitted in the wheelbase.  2 x 13 heavy duty 8 tonnes, 180˚ stowable lashing rings (TÜV certified) have been fitted as well as 2 x 13 stake pockets.

Lokhoff works with 20 permanent employees.  During peak periods, which are mainly from the construction industry holiday until winter, they recruit additional personnel.  Meanwhile Lokhoff is in consultation with Pacton regarding an additional semi-trailer which will enable them to work with a kind of switch system.  Lokhoff has come into contact with Pacton in Ommen through the regional MAN dealer.  They have heard of Pacton before then, but have never done business with them.  Lokhoff is profoundly pleased with the deliberation between themselves and Pacton, as well as the development and manufacturing of the customised semi-trailers.