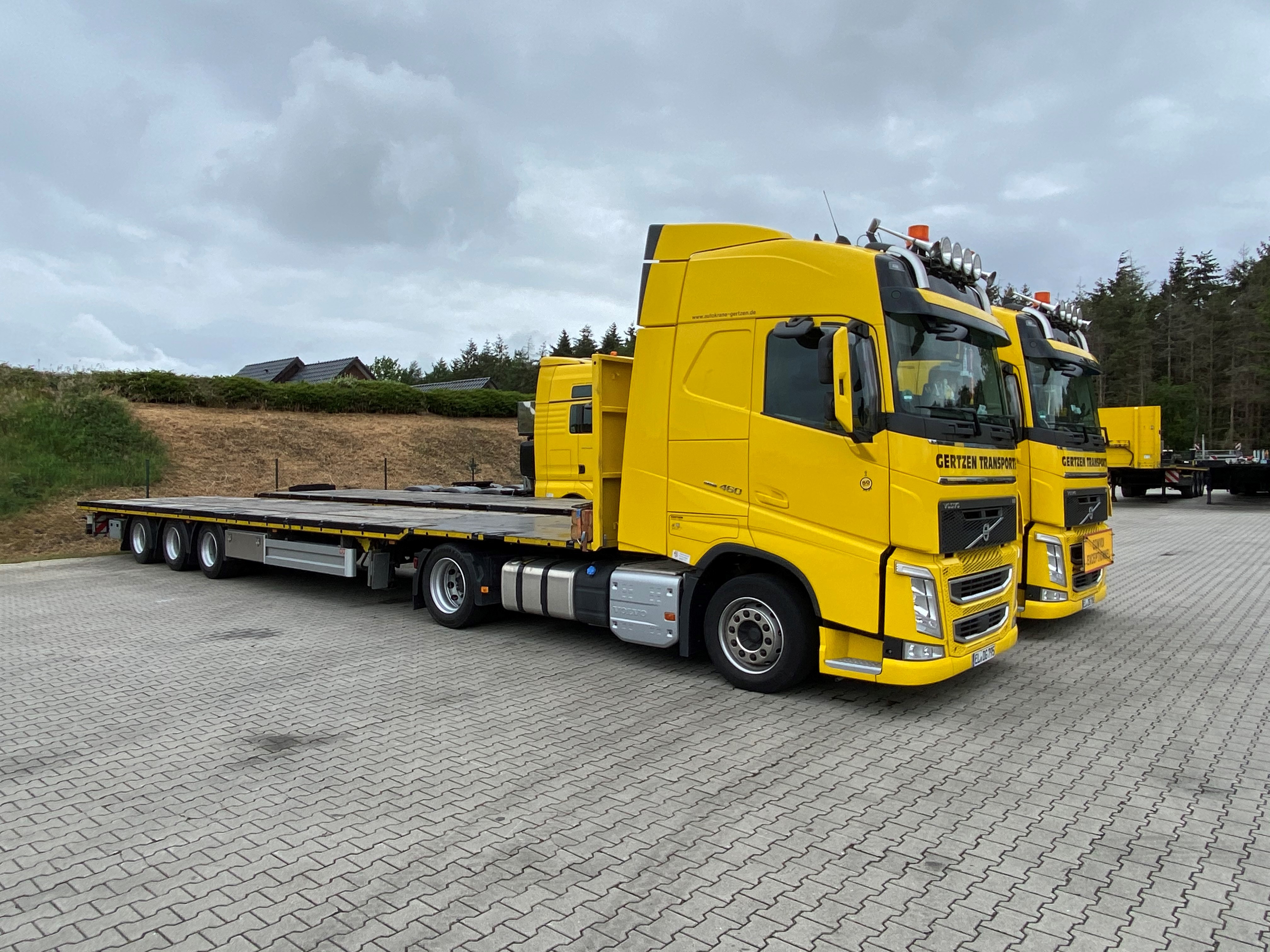 Director Wolfgang Gertzen of the German Gertzen Krane-Transporte from Kluse-Ahlen has been introduced to Pacton Trailers at the IAA in Hannover Messe.  An order for two open Mega semi-trailers followed soon thereafter. The company has recently received the third Pacton semi-trailer that has an almost identical configuration as the first two semi-trailers.  Gertzen relates enthusiastically that the semi-trailers are extremely compact and low, including the goose neck.  Besides that, he continues to say that they are exceptionally robust.

Gertzen Krane-Transporte actually transports everything with the Pacton Mega semi-trailer from construction site equipment, wind turbines components and exceptional width transport to containers.  A variety of twist locks have been fitted for the transportation of a 40 ft, 2 x 20 ft or one 20 ft centrally placed containers.  “Der machen alles”, is the sober summary of director Gertzen.  He explains that they can make use of the maximum height due to the low loading floor.  The Pacton trailers are extremely sturdy and can tolerate high concentrated loads.  He adds that the constructions are rigid and that they don’t deflect.

Gertzen is specialized in heavy and special transportation.  Not only is the company the specialist when it comes to mobile craners, tracked cranes, heavy transportation and lift platforms, but they also offer salvage and tow services for trucks.  The family owned business has been en route with mobile craners in Northwestern Germany and with trucks and special semi-trailers in the whole of Europe for more than 50 years.  Gertzen transports cargo regardless of its size or extend.  This is supported by an impressive fleet.  The key to their success is the knowing the ins and outs about different open and closed special vehicles and trailers.  Gertzen keeps everything in their control, they apply for permits, conduct route inspection,  take measures to regulate traffic if required and provide their own escort vehicle.  In this way Gertzen organises and delivers the overall solution to project logistics.  The fleet of Gertzen Krane-Transporte consists of 66 trucks and 110 semi-trailers.  They don’t have any standard semi-trailers.  Everything has been set up and executed for the realising of exceptional transport.

Besides that, the German company rents out a large range of lift platforms,  (mini) cranes and work platforms with or without drivers.  Using lift platforms  is an efficient alternative to time consuming, expensive scaffolding and special constructions in many cases.  The company is widely certified according to DIN EN ISO 9001, the so-called Sicherheits-Certifikat-Contractoren and a Green Logistics Zertifikat, among others.

The new Pacton Mega semi-trailer of the type LXD.342.L is an extra low semi-trailer that is coupled at 95 cm fifth wheel height.  The semi-trailer can carry loads of up to 3 m in height within the legal regulations and the chassis height is 1,02 m.  The fact that the semi-trailer has been equipped with a function for two ride heights, makes it extraordinary in Gertzen’s view.  Therefore, the axle assembly has a system that corrects the air suspension to a higher drive height if a higher truck of 1,15 m must be coupled.

With a modest neck height of 75 mm and the most compact 9 tonnes wheels (Continental 445/45 R 19.5), the new Pacton flatbed semi-trailer (type LXD.342.L) offers a chassis height of almost 1 m.  Yet it has a maximum load on the king pin of 15,000 kg and a gross vehicle weight of 42,000 kg.  The semi-trailer has been fitted with a SAF air suspension with three low-maintenance rigid axles and a rated capacity of 9,000 kg each.

The German legislation differs from that in the Netherlands in the detail.  For example, the last axle on the triaxial assembly must be placed more to the rear to have the 27 tonnes axle load assigned.  Without doing so, 24 tonnes applies.  Besides that, a truck with its semi-trailer and load may weight 40 tonnes at the most regardless of its axle load. In the Netherlands 50 tonnes is applicable.

The semi-trailer has been supplied with a certified bulkhead and load securing measures such as lashing holes, rope hooks under the side profile and 2 x 13 foldable lashing rings of 8 tonnes.  Twist locks for 40 ft and 20 ft containers have been fitted for the transportation of shipping containers.  Each trailer has 2 x 13 stake pockets in the side profile as well as diagonally placed stake pockets.  It has also been furnished with stainless steel boxes and open storage boxes.  On top of that the multifunctional Mega semi-trailer has been fitted with the so-called ‘Ecoled 2’ LED lighting, by Aspök.