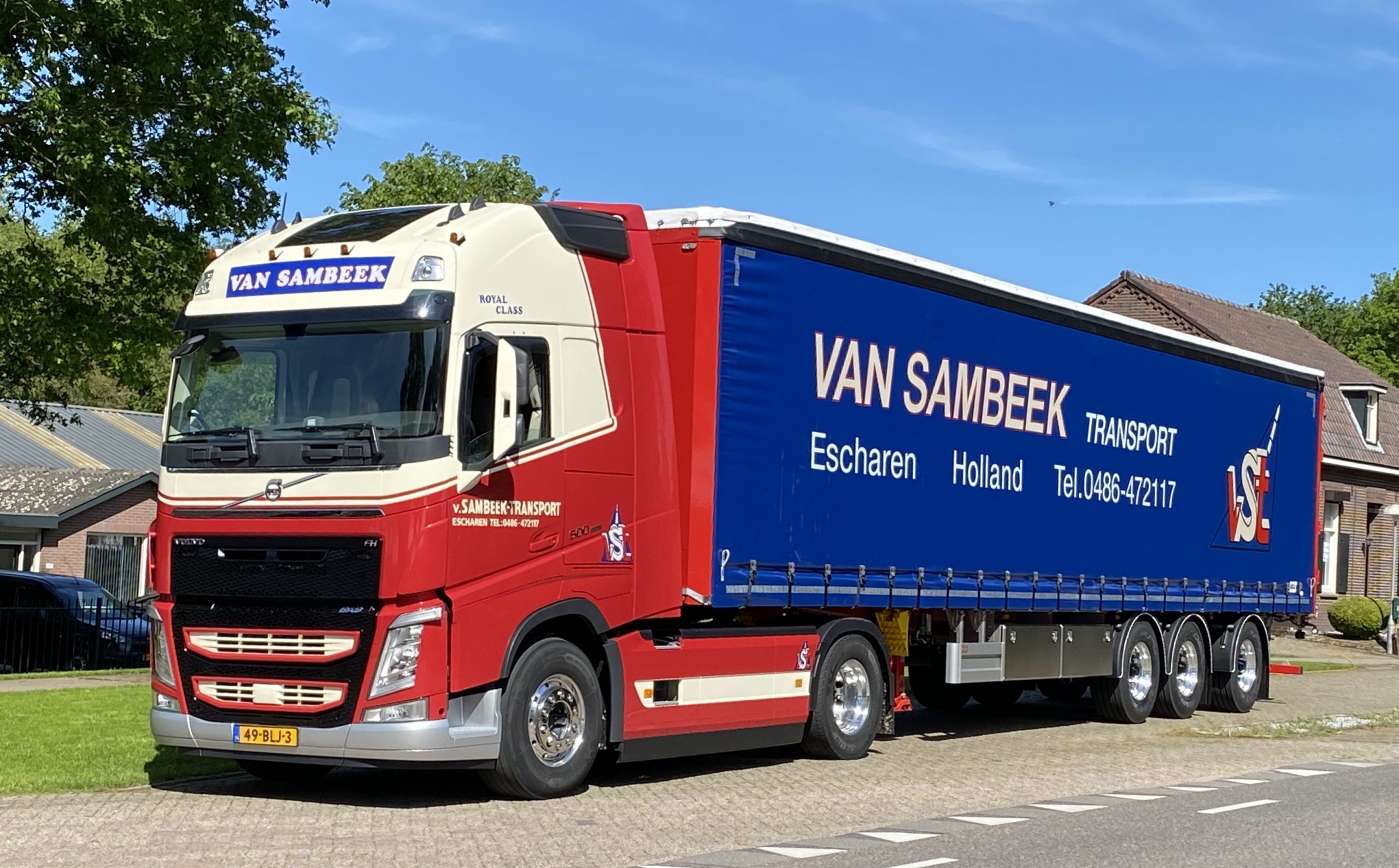 24 June 2020 The new Pacton curtainsider trailer with pneumatically operated forklift modification for Van Sambeek Transport from Escharen near Nijmegen has been acquired purely for flexibility.  This is the third forklift semi-trailer addition to their fleet.  The semi-trailers allow delivery of building supplies, paving and wood among others, to both individuals and small businesses.   Van Sambeek Transport has been founded more than 60 years ago by Huub van Sambeek.  Initially the transport company limited itself to sand and gravel.  Later on Van Sambeek extended their service to the transportation of milk, building supplies and forage.  At one stage all four of Huub van Samebeek’s sons were actively involved in the company.  Of the Van Sambeek family, Tonnie, Willie, Theo and Huub are still regularly active in the company.  Theo van Sambeek is still responsible for the maintenance of the fleet.  Anne-Marie, who is one of the sisters, works in administration.  Bas Bruisten has been the owner for the last two and a half years and was drawn to be the steersman in a special way.  When it became evident that no-one in the family was available as successor, a suitable candidate was sought after outside the family.  They have found the perfect candidate in the person of Bruisten, who was the account manager at Bas Truck Centre - a Volvo Trucks dealer in Nijmegen - at that time.  Van Sambeek had had a long and good relationship with them.  Bruisten took the step to entrepreneurship with enthusiasm. He explains that Van Sambeek Transport is a healthy business with an established name in the wider region.  They are almost continuously employable with many of their own work and even a couple of charters.

The new Pacton curtainsider trailer of the type TBD.342.TS is one of the many semi-trailers that Van Sambeek has bought from Pacton Trailers in Ommen for many years.  Previously they have bought different Floor semi-trailers, which are now produced by Pacton Trailers.  They have already bought two new Pacton/Floor semi-trailers.  The latest triaxial curtainsider trailer with sliding roof has a coupling weight of 15,000 kg, a total axle weight of 27,000 kg and a gross vehicle weight of 42,000 kg.  The rear end has been fitted with a pneumatically operated forklift holder modification and a swivelling forklift bump beam.  The BPW air suspension has three low maintenance rigid axles and a raise-and-lower valve to the left behind the bogie.  The rear axle has been mounted on a turntable and is rod steered.  The front axle is liftable.  The curtainsider trailer has been fitted with 2x19 lashing rings in the side raves.  The extensively equipped semi-trailer has furthermore been provided with two wheel wedges including holders mounted to the left and the right of the landing gear, a foldable dangerous substance sign and three stainless steel tool boxes.  Due to the fact that Van Sambeek Transport regularly transports waste paper, they have chosen to place the axles slightly more to the front on account of the distribution of the weight.  The semi-trailer has been delivered with a load safety certificate for 27,000 kg.  For this purpose the semi-trailer has been executed with a reinforced bodywork (bulkhead, rear frame, rear doors and stanchions), additional strap belts both in the sliding sleets and steel cables in the roof. Bruisten explains that they have intentionally a robust execution.  He admits that their semi-trailers from Pacton have a marginal higher weight, but that the quality is notable in practice.  He says that a semi-trailer like this is good for at least 15 years.  They just about always transport heavy materials with travel weights of above 25 tonnes, which include complete as well as partial loads that require many stops.  This is where a lorry mounted forklift proves its worth.

Van Sambeek Transport has 18 drivers and 22 employees in total.  Bruisten says that for new semi-trailers, they choose executions with little fuss, but with a distinct look.  This is accomplished by using the company’s own colours, namely coral red and black, and blue sliding sheets in accordance with the forklift and the Volvo truck.  The semi-trailer has been fitted with fine looking Alcoa rims.  Bruisten continues to say that they find unity in the look important. They expect to receive two more new curtainsider trailers from Pacton before long, raising the total amount of semi-trailers that Van Sambeek owns to 27.  Van Bruisten adds with a laugh that their fleet also counts 17 trucks from Volvo, naturally.
Ik wil deze trailer