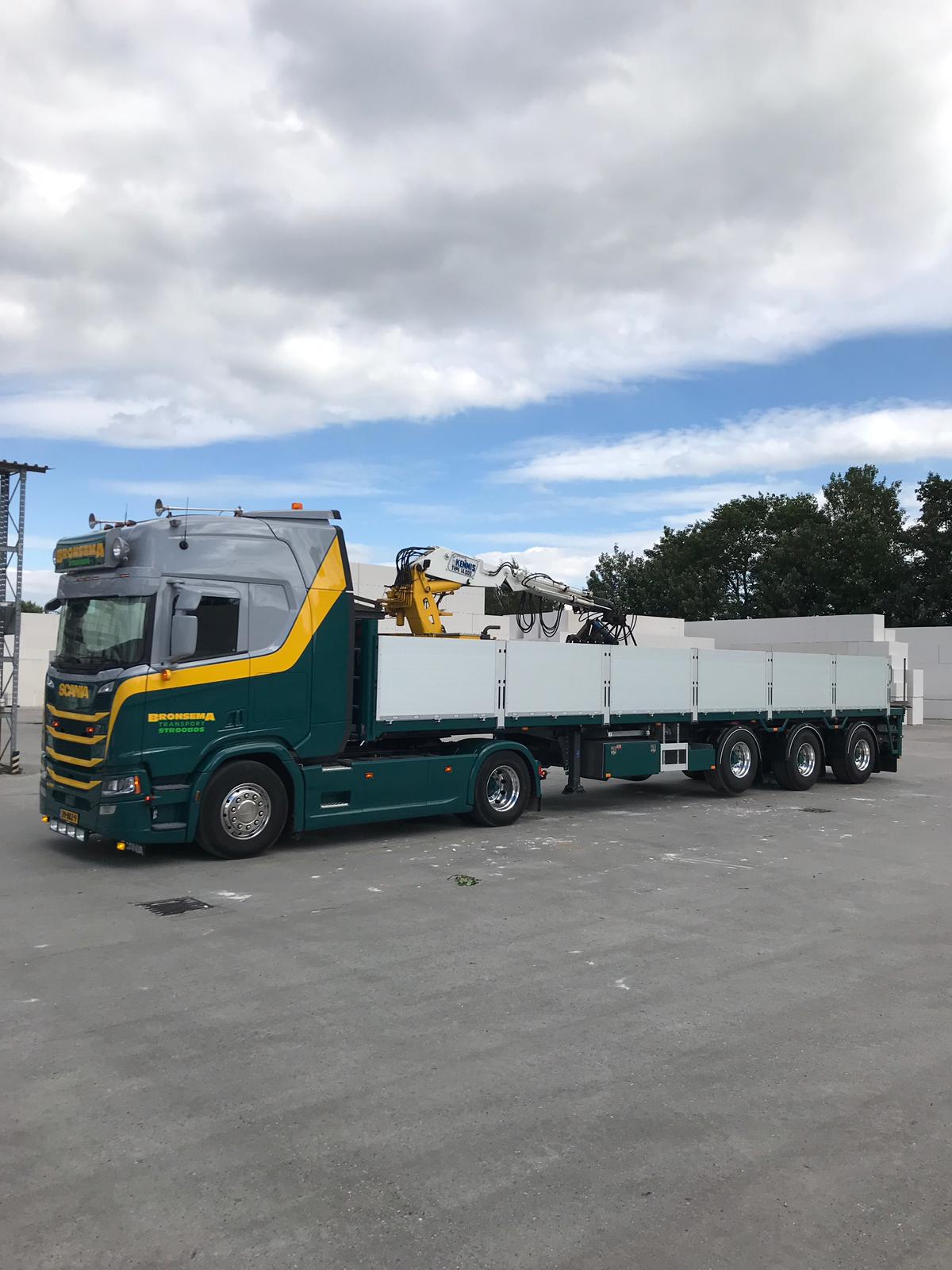 Bronsema Stone Trade and Transport from the Frisian town Stroobos, has recently implemented a beautiful new Pacton/Kennis crane semi-trailer.  The triaxial stone semi-trailer of the type TBD.348.CB with its stylish anthracite grey and green and accents in chrome, aluminium and stainless steel, is widely deployed for the transportation of construction material.  The particularly well-equipped semi-trailer has been fitted with a synthetic anti-slip floor among others, for the utilisation in Germany.

The two brothers Menno and Klaas Bronsema are the shared owners of the company together with their father, Jappie.  A great diversity of clients is served by them and their team consisting of three employed drivers, as well as Menno’s wife José who handles the administration.  The family owned company will be celebrating their 75th anniversary next year.

Menno Bronsema says that even though they had to wait a year for the new semi-trailer, it was worth the wait.  He adds that Pacton/Kennis is the reputable name for stone semi-trailers.  He adds that three of the six stone semi-trailers that they currently have in their fleet are from this trailer builder and that he is truly enthusiastic about it.  Bronsema explains that the new semi-trailer serves as replacement for a 20-year old semi-trailer, also from Pacton/Kennis.  He is convinced that they will be able to use this semi-trailer for the coming 20 years.  Besides that, Ommen is favourably located for them due to the fact that they transport a lot of sand-lime bricks for a German customer and therefore are often in the region of Ommen.  If they happen to have problems with a semi-trailer, they can practically drive by easily.

The Bronsema company consists of two branches.  On the one hand they have a transport section with six trucks and on the other hand they have a stone trade.  Both private individuals as well as contractors will find an extensive selection of raw construction material, such as sand-lime bricks, stone tablets, roofing tiles, baked paving stone, sand, gravel, cement and lime.  These products are transported and distributed with the use of their own fleet which encounters for roughly ten percent of their transport activities.  The remaining transport activities are conducted for companies and include mainly building supplies and concrete products.  In addition, Bronsma says that they also take care of transport both domestic and abroad, with reefers and flatbed semi-trailers.

Bronsema chose  the traditional Kennis crane semi-trailer above the Light version.  Furthermore he chose  the maximum length and two (of the three) steered axles.  The front axle is liftable.  He explains that they have opted for a synthetic anti-slip floor specifically for its utility in Germany, keeping  the requirements for load securing in mind.  Not only do the transport paving material, lime-stone, stone tablets and concrete products, but occasionally they take care of the transportation of rubbing plates.  According to him, that is the reason why they have chosen for extra stakeholders.  The Pacton/Kennis crane semi-trailer for Bronsema has a loading platform of 13,15 m and a coupling weight of 18,000 kg.  The total axle weight is 30,000 kg and the gross vehicle weight is 48,000 kg.

It has been fitted with a widespread air suspension with SAF-axles and traction help up to 30 km/h via EBS.  The front axle is liftable.  The two rear axles are steered mechanically with rods from the coupling disc. The chassis beams of the semi-trailer doubles as crane guides and fixed crane ramps have been fitted at the rear end.  The crane-semi trailer has been delivered with load securing certification for the bulkhead, lashing rings and stake pockets.

The semi-trailer has been equipped with a fully renovated and refurbished 14 tonnes/meter used Kennis crane by the transport company. They did not hold back on the options.  Menno Bronsema explains that since they are not a huge company, they do not often buy new semi-trailers.  Moreover, as a family they also take care of the transportations. It is logical then that they would like everything to be neat and complete and yes, they like a good-looking radiance regarding extras which include chromed edges, Alcoa rims, LED lights and extra brake lights.  He claims that it is necessary if you acquire a semi-trailer for the next 20 years and they didn’t intend to cut cost by cutting the detail.

Regarding the lighting, LED technology has been used throughout.  Moreover, the semi-trailer has been fully executed with a manoeuvre coupling at the rear, an automatic SKF lubricating system, two stainless steel toolboxes, a galvanized  open storage box, many stake pockets and stanchions, an aluminium partition, an insertion for stanchions and a Wabco Smart board among others.  The holder for the pallet fork is completely integrated in the bulkhead so that it doesn’t take up any space whatsoever.   The charming grey and green semi-trailer has anodised  aluminium side panels and side drops.  The side panels are fitted with two times six hinges and are removable.  The chassis has been thermal spray coated completely and then sprayed with a 2-component quick-dry filler primer and finished off with a 2-component paint with high filling properties.

Bronsema concludes that it is a  pleasure to work with and a beautiful combination in conjunction with one of their young trucks.