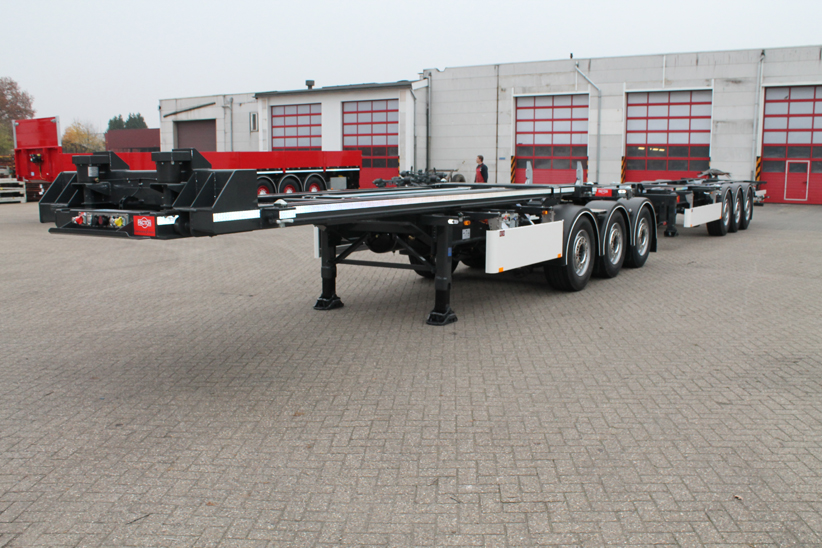 This year exactly 25 years ago, Jan Starmans has set up his transport company, starting with only one truck.  In the meantime the company has expanded and currently counts about 125 employees, whilst the fleet has grown to 120 trucks with container chassis for the transportation of sea containers throughout Europe.  Transportation occurs to and from all West European coastal harbours as well as inner harbours and the central points being Rotterdam, Antwerpen, Amsterdam, Rhine, Main and Ruhr regions in Germany.  Most of the destinations are situated in the Netherlands, Belgium, Luxembourg, France and Germany.   Their head office in the South Limburg city Kerkrade, is centrally located in the European field of activity.

The LHV combination for Starmans is made up of a triaxial  B-double container chassis (type BXC.345) and a Pacton Flex-XL triaxial multifunctional container chassis.  The B-double is Pacton’s multifunctional LHV solution.  Not only is it possible to create a LHV combination with a B-double, but this semi-trailer can also be utilised as a short semi-trailer when the axel assembly is retracted.  Pacton’s range of products includes the B-double executed as a flat trailer for the transportation of containers as well as a curtainsider execution.  The B-double for Starmans can carry a 20 feet container.  Loading and unloading the container at a dock can be done pneumatically to and from the rear.

The multifunctional Flex-XL container chassis is extendable at the front, the back and in the wheelbase (from 9,31 m up to 13,91 m), making it suitable for various containers.  With the Flex-XL can carry one 20 ft, two 20 ft, one 30 ft, one 40 ft or one 45 ft containers.  The self tracking axle allows for a maximum weight on the king pin of 16,000 kg and a maximum weight on suspension of 27,000 kg, with the gross vehicle weight being 43,000 kg.  The semi-trailer is fitted with removable aluminium boards for driving when extended as well as a rotating LHV board.

The latest LHV combination is commissioned in the Netherlands exclusively, as is the other five in their fleet.  Should legislation abroad allow for the use of LHV combinations, the number of LHV combinations in their fleet will increase according to Starmans.  He explains that a fleet is of the utmost importance to transport companies in challenging times as is the case at this stage and that it has their continuous attention.  He adds that their preference go out to Dutch products and that he fails to see any reason to buy a similar product in Germany if one could stimulate the Dutch economy instead.