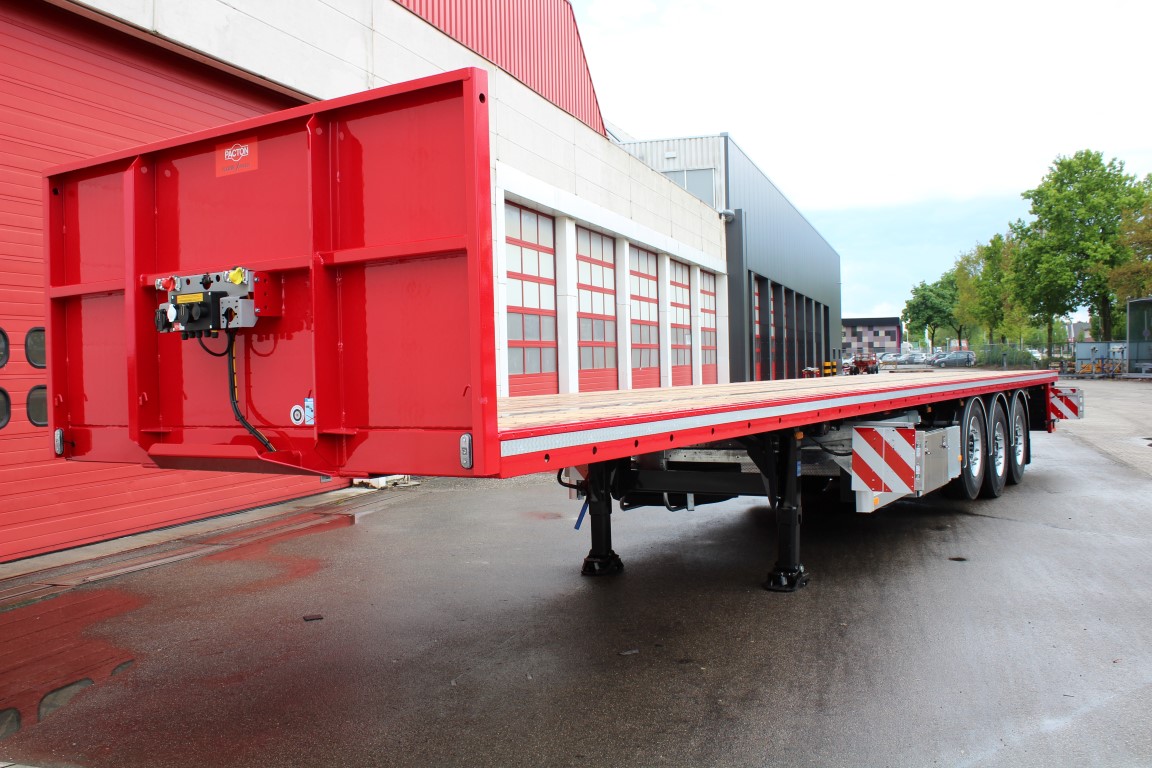 NieuwsNIJKAMP TRANSPORT ACQUIRES A SEXTET OF FLOOR UNITS FROM PACTON

NIJKAMP TRANSPORT ACQUIRES A SEXTET OF FLOOR UNITS FROM PACTON

Richard Nijkamp, director of Nijkamp Transport situated in Geesteren and Wessels Logistics situated in Almelo, has recently received the sixth and last triaxial Floor flatbed (type TXD.344.L) from Pacton Trailers in Ommen.  Contrary to acquiring used semi-trailers in the past,  Nijkamp has made a conscious decision this time to purchase six new, custom-made  semi-trailers.  He explains that it is in their advantage to be able to pick the supplier, to compile their own specifications and to create unity in their fleet.  Consequently these advantages lead to benefits in terms of use, maintenance and repairs according to Nijkamp.

The family owned business was founded in 1934 and Richard Nijkamp and his brother Emiel are representative of the third generation running the business.  The company is specialised in the transportation of building material, excavations, and demolition, delivery of sand as well as gravel and granular debris among others.  Furthermore, they are also specialised in the rental of dumpers, concrete mixers, bulldozers, mobile excavators, debris and waste containers and loading floors. Wessels logistics has also been a family owned business, founded in 1802.  It has been taken over by Nijkamp Transport in 2002.  Wessels logistics focuses on the transportation of anything from goods to full truck loads, including chemical products and VLG/ADR substances.

The new Floor semi-trailers are deployed for the transportation of building material, wide slab floors from Nijkamp Transport in particular.  The new semi-trailers have partially been purchased as expansion on the current fleet.  Earlier this year a triaxial curtainsider trailer with a lorry mounted forklift from Pacton has already been acquired by Nijkamp.  The year before has seen Nijkamp welcoming four new biaxial City semi-trailers from Pacton to their fleet.

Nijkamp Transport and Wessels Logistics with locations in Germany and Hungary, have a fleet of 95 trucks and well over a hundred semi-trailers to their disposal.    For the six Floor flatbed semi-trailers, Nijkamp has chosen for an extra robust, heavy-duty execution and the (optional) thermal sprayed chassis and bulkhead to enhance the lifespan.  Nijkamp says that the semi-trailers are expected to be functional for at least 15 years and are mainly used for domestic transportation of building material.  The semi-trailers have therefore been executed to meet the needs as specified by Nijkamp.  The Floor semi-trailers are 13,54 m in length, with a maximum weight on the king pin of 17 tonnes (instead of 15 tonnes), a maximum weight on suspension of 27,000 kg in total and a gross vehicle weight of  44,000 kg.  The SAF intradisc air suspension includes three rigid axles with disc brakes.  The axle weight can be read off the EBS.  The front axle has been fitted with a fully automatic liftaxle via EBS, including a rocker switch on the chassis to enable forced lowering.  In addition, the semi-trailers have been fitted with  Wabco electronically regulated air brake systems (EBS) with EBS 2S/2M, anti-tilt systems (Wabco RSS), two ISO connections each and parking brakes via the spring brake cylinders.  The rear lights, lights on the sides, back-up lights and the rear number plate lamps are all based on LED technique.  Furthermore, the semi-trailers are fitted with aluminium sidequards, aluminium light pan bumpers at the rear, 2 x 11 stake pockets in the sides and also in the front of the main frames and in the hart lines. Heavy duty lashing rings have been placed underneath the side raves and lighter lashing rings have been placed under the rear edges and against the outside of the bulkhead.  Galvanized open boxes have been fitted crossways under the chassis, on the left and the right mounted in the wheel bases with support for stanchions and stainless steel toolboxes on the left hand sides.