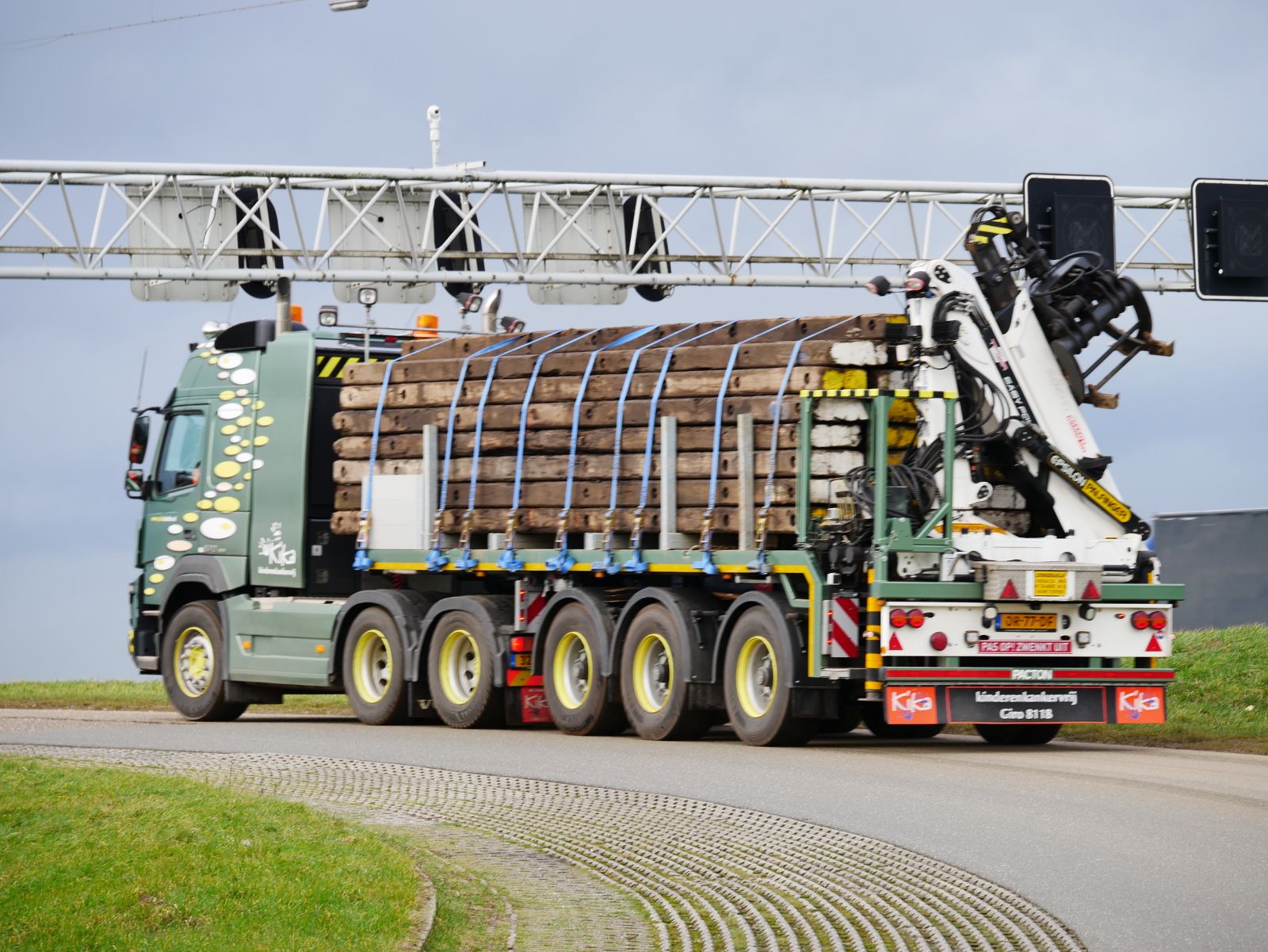 HEENVLIET – R. Kamermans Transport, situated in Heenvliet, has been promoting the foundation for funding childhood cancer research (www.kika.nl) selflessly for many years.  Not only has Leen Kamermans, a 55 year old driver, solicited funds by means of his truck, but also with the new Pacton semi-trailer that carries the Kika promotion.  Every driver behind the semi-trailer is made aware of the fund-raising for the foundation, with the custom-made mud flap that covers the width of the semi-trailer.

Leen Kamermans of VOF R. Kamermans of the general partnership R. Kamermans Transport in Heenvliet, started his own company 20 years ago together with Renata, his former wife.  Simultaneously he bought his first Pacton semi-trailer.  The new semi-trailer is primarily the same as the first one.  Kamermans is amazed by the fact that he has never had any problems with his first semi-trailer.  He explains that he has replaced the wheel bearings and the air bellows preventatively.  After 20 years he felt that it was high time for a new semi-trailer, even though there was nothing wrong with the one that he had.  He comments that he often goes to refineries and that it is better to have newer material for those conditions.

One has to look for the company name on both Kamermans’ truck and semi-trailer.  The Kika-logo, giro account number 8118 and their web address on the other hand, stands out on all sides.  Kamermans has been trying to raise funds this way for the last 10 years. He prefers that people see the Kika-logo rather than his name.  He argues that his clients know his name and that they are aware that he does his job well.  The sober-minded Kamermans doesn’t have a website for his company either.  The owner of the mud flap company (www.spatlappen.nl) has once again made a custom mud flap according to Kamermans’ specifications, also for the good cause.  Previously WSI truck models of the Kamermans truck with the Kika advertisement were sold, which became popular amongst collectors.  Profits were donated to the Kika foundation.  According to Kamermans, it is a pity that the FMX is not known in de truck modelling word, they could otherwise have made one more model.

The Pacton semi-trailer (Pacton TBD.344.L) for Kamermans is 9.6 m in length and has three axles, of which the first two are equipped with an axle lift.  The rearmost axle is mounted on a pivot plate and steered by means of a rod from the coupling.  The total axle weight is 27.000 kg and the admissible weight for the semi-trailer is 44.000 kg.  The trailer is supplied with a fixed Epsilon 17 tonnes/metre crane which was bought and mounted by P. Ruizeveld Ltd in ‘s-Gravendeel.

The configuration that Kamermans has chosen is actually exactly the same as the one that he has bought 20 years ago.  Kamermans remarks that he has obviously weighed all of his options very well and that he has tuned it perfectly to its use.  He has talked it through with colleagues as well as with Pacton.  He took the old semi-trailer to Pacton in Ommen, where they have discussed everything.  He specified everything to his needs.  He still had questions after that, upon which the Pacton staff replied that he could always come by with the trailer and that is what he did.  His experience was that Pacton took the time for him during the acquisition.

Kamermans carries many rubbing plates and partitions for the Plaisier company in Hendrik Ido Ambacht.   Furthermore, he often visits sites where Euro 6 trucks are mandatory.  With this in mind he has bought a new Volvo FMX 6x4 three years ago.

The new semi-trailer is equipped with a special safety cage, due to his work for the refineries.  This enables him to operate the crane in a safe environment.  He says that it was his own initiative and that his clients are pleased with it.

Kamermans was pleasantly surprised with the light design of the new semi-trailer, which is about 1000 kg lighter than the first one.  He was once again stunned with the flexibility when it is in use.  He claims that he owns the shortest 3-axle semi-trailer in the Netherlands, making it extremely flexible.  Contrary to the previous semi-trailer which has had a self tracking axle , the new semi-trailer is forced steered on the rearmost axle.  This makes reverse driving possible in tight spots.  When he turns in reverse, the truck stays in the track of the semi-trailer.  One small tick and it turns, he says amazed.