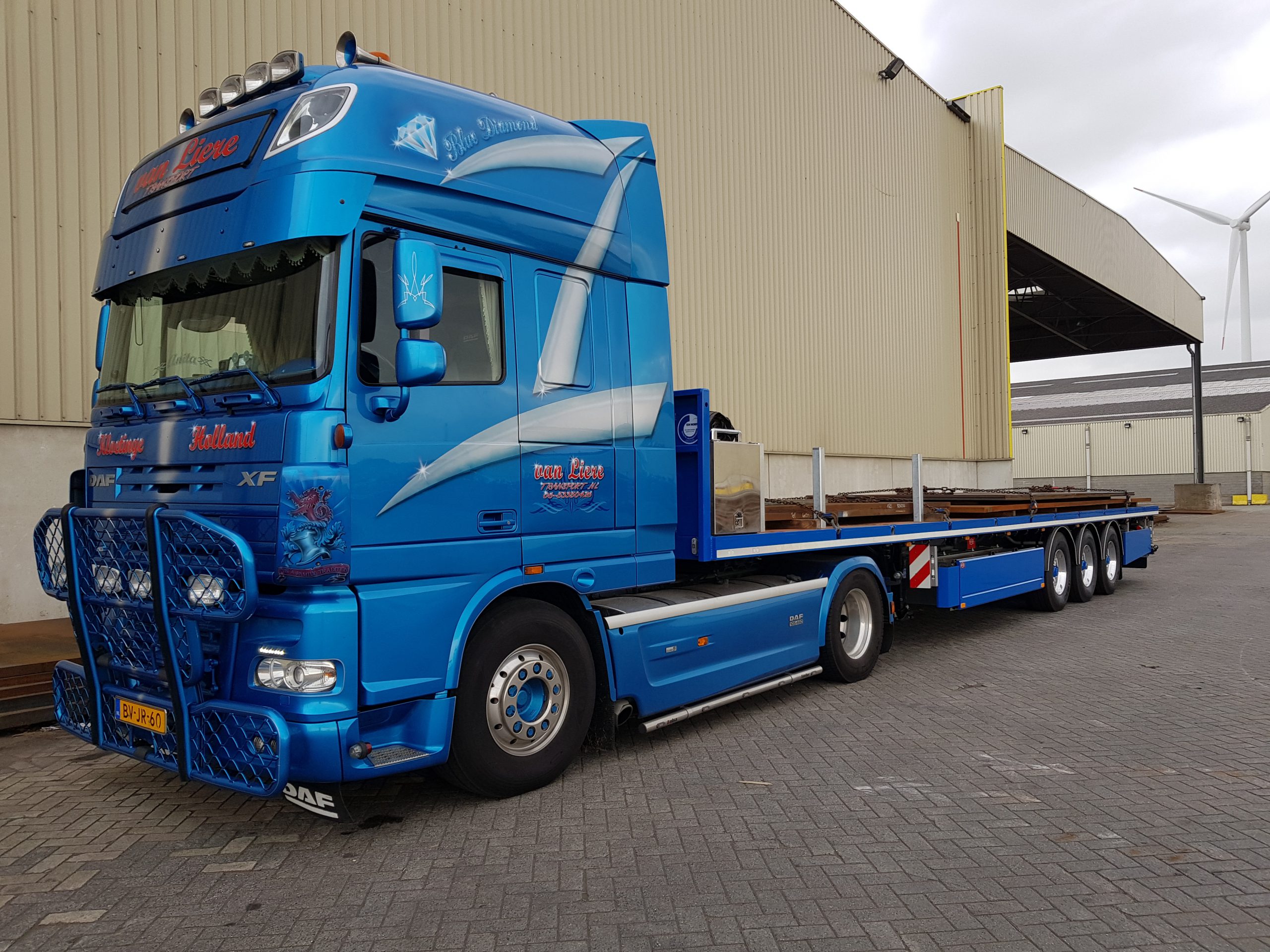 KLOETINGE – Marco van Liere from Kloetinge reports that he requested quotes from three semi-trailer manufacturers.  Pacton Trailers replied straight away as first and their representative offered to go over the specifications at Marco’s home. Subsequently Van Liere Transport as of recently works with a new Pacton 3-axle, open semi-trailer.

Marco van Liere (48) has been working with the new Pacton semi-trailer to full satisfaction for some time now.  He states that it is easier in use, quicker and safer.  The semi-trailer is used by Van Liere for the transportation of steel sheets that he carries for a Belgium steel trader to buyers in the Netherlands and Belgium. Van Liere remarks that for once he wanted to do it properly regarding the latest addition.  He explains that he accomplished that by, for example adding a series of strategically placed stake pockets and special lashing rings on the sides to enable flexible fixation of the cargo.  Besides the ease and safety, everything is certified on top of that. These days it is monitored sharply.  Van Liere jestingly adds that in the meanwhile he has more certificates than stakes with him.

As a family owned business, Van Liere Transport goes back three generations.  This transport business started in 1926 with a horse and wagon.  Marco with his father, Ko during the first couple of years.  For the last seven years Marco has been running the business on his own.  Van Liere works with a DAF Super Space Cab, with 460pk and a Euro 5 engine.  He expects it be good for another couple of years, since he takes good care of his material.  In combination with the Pacton semi-trailer, he reckons that he is perfectly equipped for years to come.

Van Liere’s new semi-trailer has three rigid axles with drum brakes. The technical loading capacity is 9,000kg per axle and both the front and rear axles are liftable.  Furthermore, Van Liere’s customised execution consists of a pallet box, a reversing camera and side underrun protection amongst others.  The exterior of the semi-trailer has also been beautifully executed in the blue, corporate colour of the company.  Marco stresses that the exterior is not frivolous, considering that the semi-trailer must be good for the next 20 years.  He continues to say that he finds it important to make a good impression.  He is pleased with the work in the steel transport.  Marco elaborates that he has a good customer and De Lier being a small, yet professional transport company, is able to provide flexible service.  That, he states, is his power.

The Pacton firm is familiar with Van Liere, as the family-owned Van Liere company has bought a couple of semi-trailers from Pacton in the past.   Van Liere comments that both the trailers as well as the contact with Pacton have been to their satisfaction.  He describes the delivered custom work as sound, neat and living up to the expectations.  Van Liere says that he wanted to make a few changes on the order after it has been placed and that it was arranged without any problems.  The same applies for the after-sale service.  It something is possible, it is arranged. If unexpectedly it turns out to be impossible, then it is communicated honestly.  Straightforward, just the way I like it.  That is after all the way I am myself.