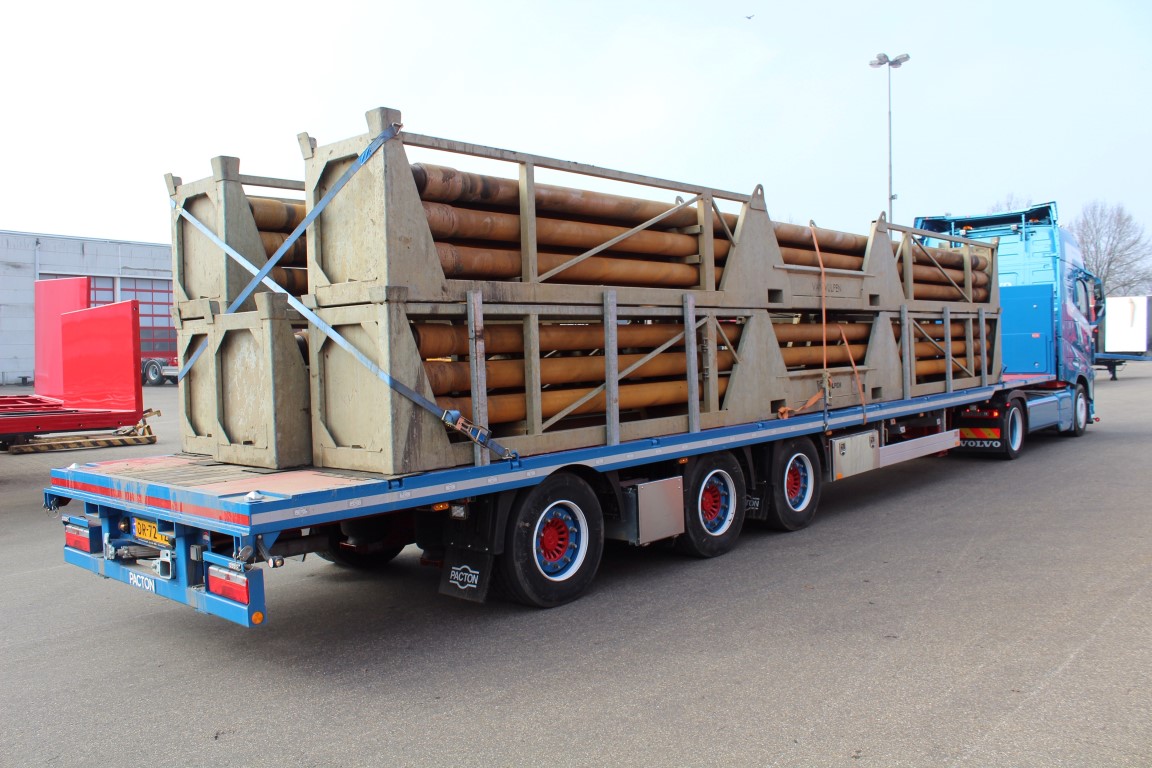 Blaauw Transport (www.kraanauto.nl) from Werkendam in Brabant, has chosen to expand its current fleet consisting of eight trucks and ten varying semi-trailers with a new Pacton flatbed trailer for the first time.  The extra low semi-trailer with a neck height of 75 mm, was fully specified according to the client’s requirements.  The semi-trailer is frequently used for the special transportation of prefabricated construction parts and even for the transportation of complete prefabricated houses.

Roelof Blaauw, who is responsible for the planning and maintenance among others, says that their work consists for about 85% of exceptional transport.  He explains that they work with modules of 3,33 m in height in the prefabricated building industry.  In an attempt to transport it as efficiently as possible, he says that they aim to keep the total transport height under 4,4 m.  This required an extra low semi-trailer that has been custom-made for them by Pacton.  The tri-axle rigid flatbed semi-trailer of the type LXD.342.XV is extra low, as requested by the client.  It has a neck height of 75 mm and a chassis height of 1,030 mm.  With a total axle weight of 27,000 kg and a coupling weight of 15,000 kg, the gross vehicle weight amounts to 42,000 kg.  The SAF air-suspension has two rigid axles and one self-tracking steered swivel axle that allows for added manoeuvrability in small spaces.  The front axle is a liftaxle.  Blaauw adds that the rear of the 13,64 m long semi-trailer has been fitted with a pneumatic connection to accommodate a truck-mounted forklift and that both the light pan as well as the bumper can be turned away.

The transport company has been founded by father Adriaan Blaauw in 1981 and he is still managing the company.  The eight employees have access to a modern fleet that is as diverse as their clients in for example the construction work, the prefabricated building industry and hydraulic engineering.  They have eight trucks and ten semi-trailers in a variety of executions ranging from flatbed semi-trailers to stepdeck trailers and curtainsider semi-trailers.  Blaauw Transport is specialised in exceptional transport with specific trucks and semi-trailers to do so. The crane trucks that can be utilised vary from 20 tonnes/metre up to and including 100 tonnes/metre, with a reach of 36 m.  Blaauw Transport is furthermore well equipped for environmental work.   They have their own waste stream number which allows them to transport uncleaned fuel tanks and to place and (de)assemble soil/air purification plants.

The new Pacton semi-trailer is combined with a Volvo FH4 with 500 pk, an extraordinary and multi-functional combination.  Besides the possibility to transport high building modules efficiently and the ability to carry a truck-mounted forklift, the Pacton semi-trailer also has twist lock connections for two 20 ft containers and one 40 ft container.  In addition to two spacious stainless steel boxes, one to the left and one to the right, a storage box has been fitted between the second and the third axles to the width of the semi-trailer.  A total of 26 stake pockets have been placed in the frame and a further four rows of stake pockets have been placed across in the hardwood floor to optimise the layout and securing of the cargo.  22 foldable lashing rings of seven tonnes have been integrated into the frame.  The semi-trailer has also been supplied with supports for the storage of ramps in the wheelbase and four width warning signs with lighting.  The blasted and galvanized chassis has been sprayed with a 2-component primer and finished with off with a 2-component chassis paint in the colours of Blaauw Transport.

Roelof Blaauw says that they have had a used Pacton semi-trailer in the past, but this is the first time that they buy a new one from Pacton in Ommen.  He explains that it has become a complete semi-trailer.  Pacton is a Dutch trailer builder with short lines and a great story in his opinion.  In contrast to larger trailer builders offering standard ranges to choose from, Pacton offers custom made service according to Blaauw.  Not only was the low height crucial for Blaauw, but also the presence of sufficient storage space, the possibility to hook up a truck-mounted forklift and of course a beautiful finish in the recognisable blue and red colour scheme of the transport company.  Blaauw exclaims that the end result is of the highest standards regarding the appearance as well as functionality.  Besides that, he emphasizes that the strength and sturdiness of this Pacton semi-trailer makes it an excellent and durable product.