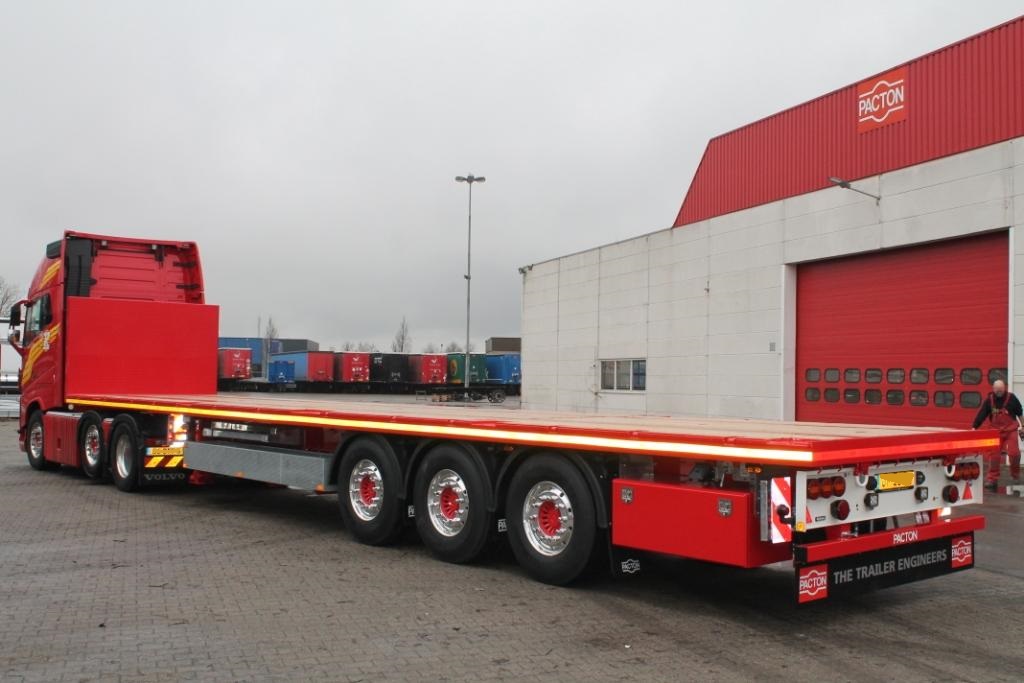 NieuwsKamphuis Transport realises unit with an investment of a trio of Pacton’s flatbed semi-trailers.

Kamphuis Transport realises unit with an investment of a trio of Pacton’s flatbed semi-trailers.

GRAMSBERGEN – The three driving directors of the Kamphuis Transport family owned company, have recently invested in three Pacton semi-trailers.  An identical semi-trailer has already been delivered a year ago and that brings the total  up to a modern quartet of semi-trailers, at the disposal of Kamphuis Transport.  Its main function is the transportation of building supplies, but Bertus Kamphuis explains that they were looking for all-in-one trailers that were suitable for various kinds of cargo.

Kamphuis Transport offers their clients flexible and sober services, backed by 16 tractors, 41 semi-trailers, 18 employees and one part-time office employee (sister Zwaantje).  The three brothers run the business in their own unique, contemporary way with Bertus heading among others the fleet, Hilbert being in charge of the workshop and Seine taking the planning for his account.  Level-headed as they are, they take part in the daily transport rides if necessary.  Bertus Kamphuis laughs when he says that blood is thicker than water and that being a small company requires flexibility.  He explains that they do many things in the transport world such as attending to their own assignments and services to their clients, which add up to about 80% of their activities and then they also help colleagues out if and when needed.  Experiencing peaks and lows regarding workload apply to everyone in the transport sector and a unit in their material is considered to be an advantage, according to Kamphuis.  The new semi-trailers are equipped with strategically placed stake pockets and twistlocks, making it easy to transport not only prefab concrete elements, but containers as well.

Besides the mentioned flatbeds, the modern and extremely diverse fleet of Kamphuis Transport consists of semi-trailers of the type Tautliner, a Euro-stepdeck and inloaders for concrete.  Not only does Kamphuis Transport take care of the transportation of building supplies, but also for example the transportation of pigs and refrigerated transport.  Kamphuis says that clients call them due to their commitment and for him, that is what it’s all about.

The three new Pacton flatbed semi-trailers are of the type TXD.334.L-422.   It has three rigid axles each, SAF air suspension and a technical load capacity of 9,000kg.  After completion of the welding on the chassis it was blasted with corundum, then metal sprayed followed by a two-component primer spray and completed with a two-component top coat.  Kamphuis jestingly refers to their company as the red Kamphuis with the yellow stripe, because a couple of transport companies are run under the same family name as theirs.  However, they are not related to each other.

Client for quarter of a century

According to Kamphuis, the company has been active for 33 years and has called upon Pacton’s services for 25 years.  He says that they had positive experiences with Pacton in the past and explains that one can count on a modern and solid product from them.  Kamphuis adds that Pacton is able to meet every request, make any adaptation and deliver different executions.  He stresses that Pacton has done a lot regarding development and innovation in the last couple of years and that is appreciated by the customer.  An added advantage is the fact that Pacton is situated in close proximity to Kamphuis Transport.

The new Pacton semi-trailers are currently fully deployed by Kamphuis Transport in Gramsbergen.  The three brothers and their sister still enjoy the transport business.  Kamphuis concludes that they manage to earn their living and that they enjoy doing so.  They are satisfied with matters as they are and couldn’t ask for more.