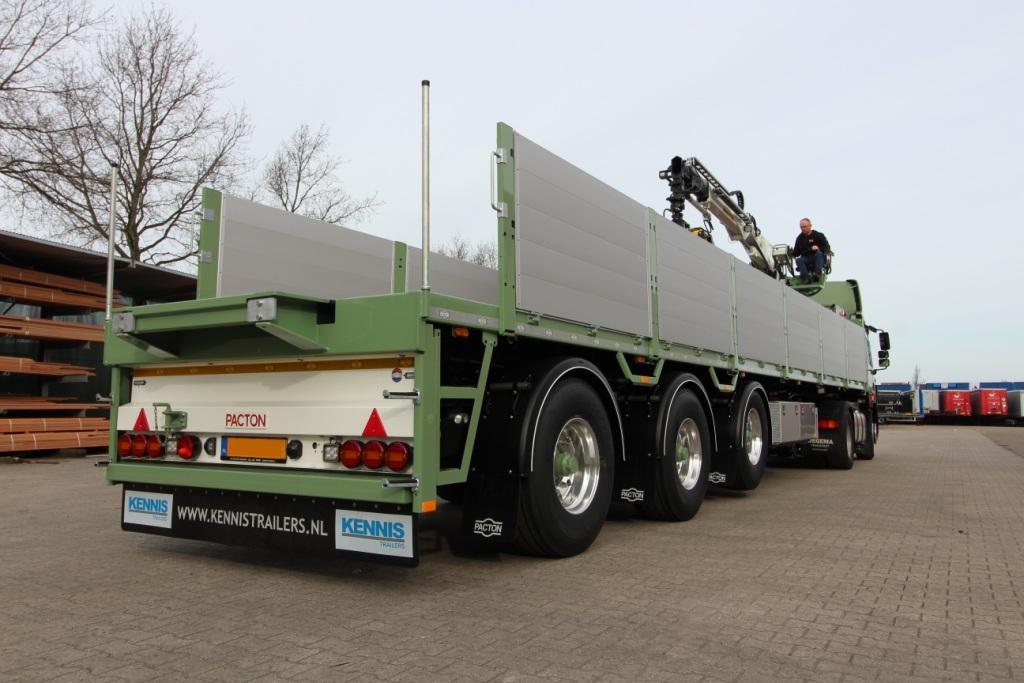 Oegema Transport, situated in Dedemsvaart, recently put four new Kennis crane semi-trailers supplied by Pacton in Ommen into service.  Technical director Gerlof Oegema explains that stone semi-trailersusually require customised products and that is exactly what Pacton excels in.  He considers the fact that service is just around the corner, with Pacton being only 15 kilometres away from Dedemsvaart, as an additional advantage.

Oegema Transport has invested in the type TPD.348.C-B semi-trailer in two different executions.  Three of the semi-trailers are equipped with KHC13 tonnes/metres mobile cranes. The fourth semi-trailer is equipped with an aggravated chassis and a 25 tonnes/metres crane from KHC.  The crane is moved along a 1.300mm crane rail.  The semi-trailers have three axles of which two are steered and have loading platforms of 13.150mm in length each.  The axle groups consist of a widespread air suspension with low-maintenance BPW-axles and drum brakes.  The front axles can be lifted automatically through the EBS or alternatively by means of a switch.  The total permissible weight of the semi-trailers amounts to 48 tonnes.  The sustainability of the crane semi-trailers, with two stainless steel toolboxes each, is guaranteed by blasting and metal spraying the completed chassis.  The finishing touch is added by using a charming gray and Palomino-green paint.  The crane semi-trailers were delivered with a TÜV load securing certificate according to the DIN EN 12642 standards code XL.

The crane semi-trailers serve as replacement and expansion simultaneously.  They are utilized for various kinds of cargo for different customers according to Oegema, such as stones, sand-lime and retaining walls.  Oegema furthermore states that, with the exception of the standard curtainside trailers, they involve Pacton in almost all of their semi-trailer needs and most certainly when considering a semi-trailer for the transportation of stone. Oegema regards the customized crane semi-trailers as simply good products.  He elaborates on the semi-trailer that is use for transporting retaining walls and has the heaviest crane (25tonnes/metre) and adds that it has been equipped with a special retaining wall clamp that is stored in the trailer bed.

Oegema Transport has a fleet of approximately 250 units, including brands such as DAF, Mercedes and Volvo.  It consists of a variety of vehicles such as volume combinations, bulk semi-trailers and small trucks.  This family business has been founded in 1919 and is currently run by the the brothers Gerlof and Sibbele of the fourth generation.  They are proud to say that although the margins in the transport business are very small, Oegema Transport still manages to show growth every year.