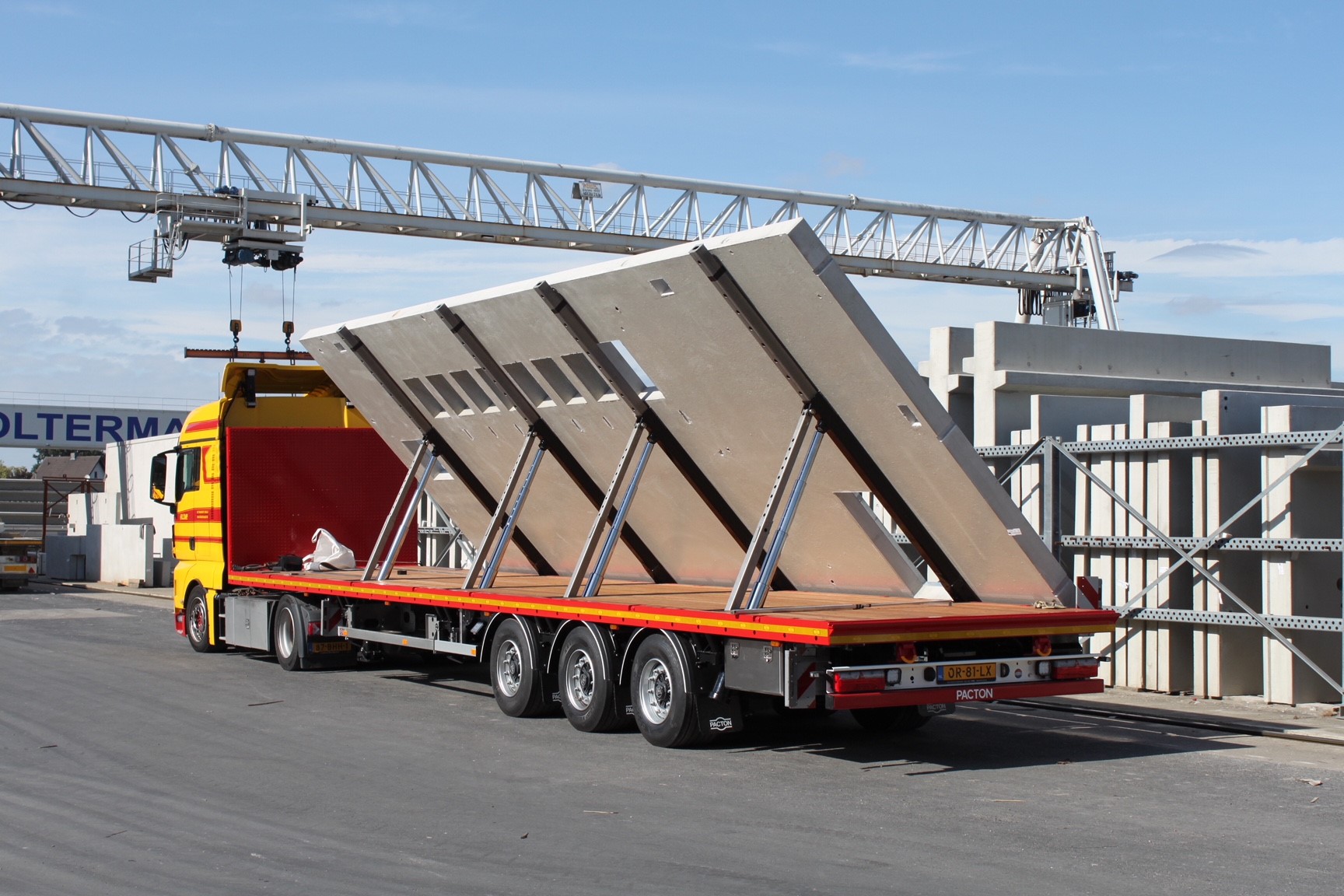 Klomp Transport from Zwolle has recently acquired a special open semi-trailer, fitted with a hydraulic tilt.  The semi-trailer, supplied by Pacton from Ommen, is equipped with four hydraulic cylinders that are able to control a total of 24 tonnes of weight.  Klomp Transport utilises this new semi-trailer for the international transport of oversized objects.  Director Jan Willem Klomp says that their choice in favour of a floor integrated tilt, allows them to take on a full freight on the round trip.  If they had opted for ramps instead, the loading space would have been restricted considerably.

Klomp Transport has already been the expert for quite some time regarding special transportation.  The objects for transportation varies tremendously and includes large artwork like that of Ronald Westerhuis and lock gates that has recently been driven to England.  Klomp Transport makes trips throughout Europe and beyond.  The new Pacton semi-trailer (type SXD.342.L-S) with the integrated tilt, enables them to be more flexible when it comes to taking on return-freight.

The semi-trailer has been designed and produced in close consultation with Pacton.  The four hydraulic cylinders for the tilt, with a total capacity of 24 t, can each be operated manually.  Furthermore, it has been fitted with an extra telescopic beam to accommodate high loads.  When the tilt is not in use, the semi-trailer has an even loading floor.  Sales engineer Martin Kosse from Pacton says that the tilt has a huge impact on the construction of the vehicle.  He explains that the semi-trailer is fitted with a special floor construction with reinforced chassis beams and that the cylinders have been mounted underneath that.

The new triaxial semi-trailer offers a maximum load on the king pin of 15,000 kg and a maximum load on suspension of 27,000 kg adding up to a gross vehicle weight of 42,000 kg.  The Pacon semi-trailer is fitted with a BPW air-suspension with disc brakes.  The front axle is fully automatic and can be lifted via the EBS.  The rear lights, side lamps, position lights, width lights, and top lights are executed with LED-technique.  In addition, the open semi-trailer has been furnished with features to facilitate ramps at the rear end, four width warning signs, two stainless steel boxes, an open storage box, aluminium sidequards, Smartboard and a hydraulic power unit among others.

The new semi-trailer has been delivered by Pacton with  RDW inspection, registration certificate an Gutachten Par.70 certificate  issued by the TUV (for special transportation).

Klomp Transport has been active in the national and international transportation since 1947.  The company currently counts 37 employees.  Their fleet consists of 31 trucks and 50 semi-trailers, including hydraulic platform step-deck trailers, double extendable step-deck trailers,  mega trailers, covered trailers, flatbed trailers and now also a semi-trailer with an hydraulic tilt. Klomp relates how they have recently transported concrete walls with the new Pacton semi-trailer from Germany.  The concrete walls were 4,20 m wide.  With the hydraulic tilt it was possible to transport it at 3 m width.  This enables them to drive with  standard dispensation, unaccompanied.  He says that this makes it less complex for both their client and for them.