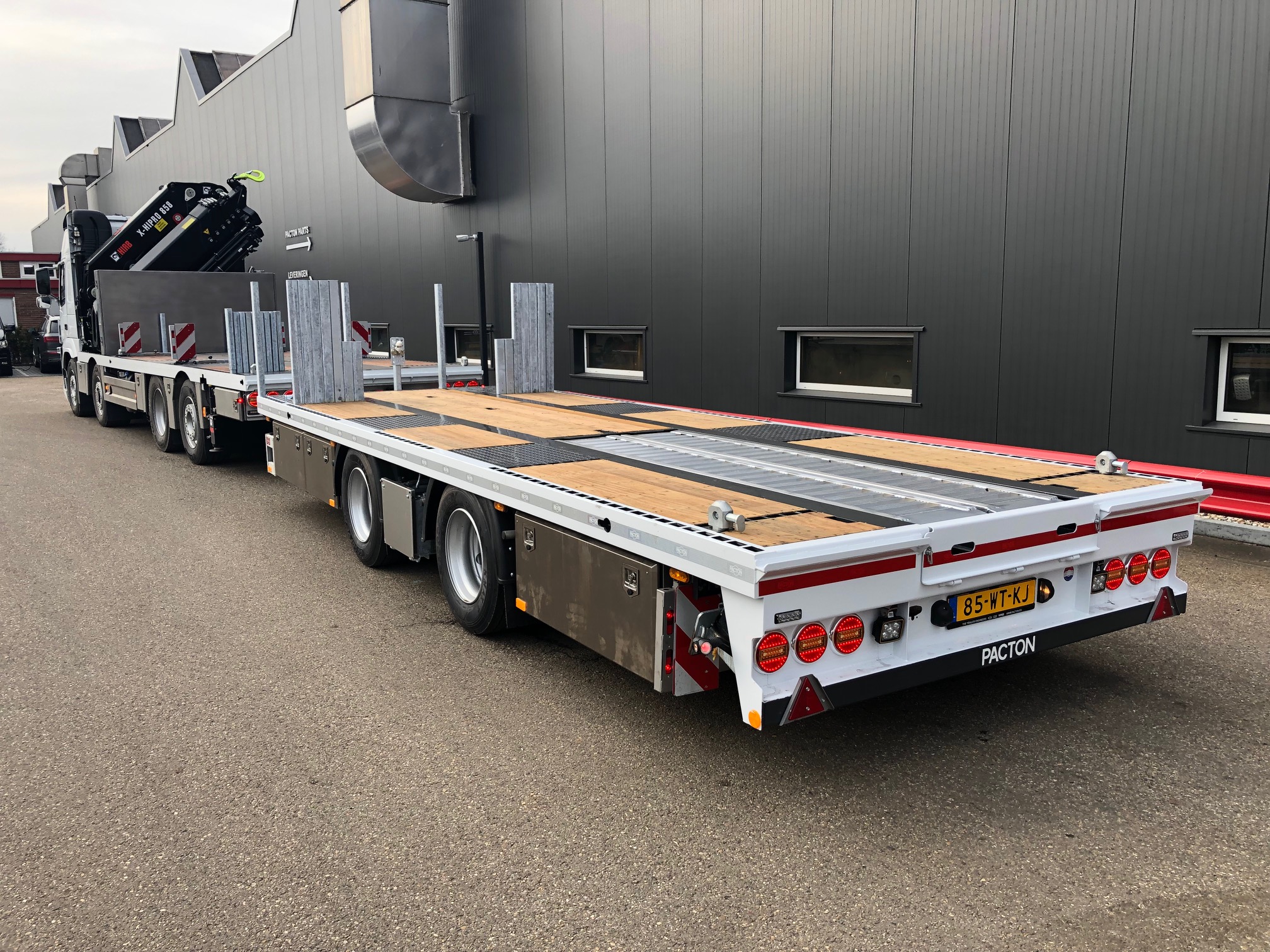 Siers Conduit and Fitting Projects, situated in Oldenzaal and subdivision of the Siers Group, carries out conduit and fitting projects throughout the Netherlands.  The new Pacton centre axle trailer for Siers has been executed in such a way that even the tiniest space above and underneath the loading floor can be fully exploited.

Rob Beernink, foreman of the Siers Conduit and Fitting Projects workshop says that besides the construction of sewage systems, they lay just about everything underground varying from fibre optic cables to high-voltage cables.  This is done by 500 employees all through the Netherlands and the border of Germany.  He adds that their own fleet is compact counting eight trucks, yet multifunctional.  Among these are two fixed combinations of which one is composed of a truck and semi-trailer and the other one is composed of a rigid and a trailer. The trailer of the latter was due to be replaced.  He explains that they have opted for a centre axle trailer to replace the old tailer.  They have been referred to Pacton by Coachbuilder Brinks in Enschede, a good relation of theirs.

The new two centre axle drawbar trailer (type MXD.218.L) from Pacton in Ommen has a length of 7,10 m and offers a gross vehicle weight of 18,000 kg.  Quarter round plastic mudguards have been fitted in front of and behind each wheel and anti-spray mud flaps behind each axle.  Aluminium side guards have been placed in front of the axle bogie, in accordance with EC-regulations.  The semi-trailer has been delivered with two aluminium ramps that are stowed away between the main beams flush with the top of the hardwood floor.  In the front and rear of the semi-trailer on the outside of the main beams, two times two retractable 7 tonnes lashing rings (TÜV certified).  It has furthermore been equipped with four stainless steel toolboxes, two to the left and two to the right of the axle bogie. At the back of the axle bogie, a stainless steel toolbox has been fitted on each side and a galvanized, open storage box to the width of the semi-trailer has been placed between the axles.  The fine-looking centre axle drawbar trailer has been finished off in Volvo-grey, with white retro reflecting marker tape applied to the sides and red retro reflecting marker tape to the back.  Two width marker signs with red and white LED lights have been placed at the rear and slides away underneath the semi-trailer.

The new Volvo FM rigid with the new centre axle drawbar trailer are put to use daily for a wide variety of purposes.  Beernink explains that this has been their reason for choosing a trailer builder that excels in customization.  He adds that they distribute their equipment and material such as agricultural tractors, mobile units, vibrating plates and building supplies mainly with this combination.  The semi-trailer must therefore be flexible adaptable and literally every centimetre must be put to use.  According to Beernink, this explains why they have chosen for the ramps that are integrated with the floor and that can be used both at the front and the back.  For the same reason they have chosen  a retractable drawbar and no bulkhead, but stake pockets in the front beam.  Besides that, he says that stake pockets have been put into the side raves and a large number of stake pockets have been put into the 28 mm hardwood floor.  Four Laxø stake pockets have been in the centre of the semi-trailer to facilitate the transport of a 20-feet container, according to Beernink.

The family owned business Siers, was found in 1964 when Herman Siers started off with three employees.  Their core business was initially to lay gas pipelines.  Siers Group Oldenzaal currently delivers a whole package regarding the underground infra of the Netherlands.  Projects in terms of gas, water, electricity and telecom are carried out, regardless of the size and complexity of the project.  Beernink boasts that Siers is still a true family business with the matching norms and values, such as a personal and collegial atmosphere.  That, combined with a social awareness and social involvement, characterises the company in his view.