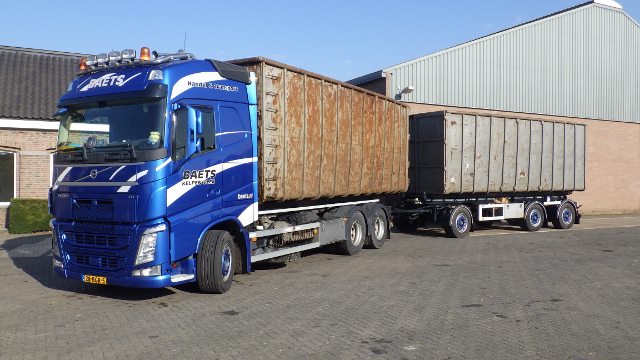 KELPEN-OLER – Baets Trade and Transport in Kelpen-Oler has recently implemented two new Floor S-Line trailers, supplied by Pacton Trailers in Ommen for swop bodies/demountable bodies.  Director Marc Baets explains that they have gone through the experience of a trailer turning over on the highway once when the bulk material in the container was mostly situated on one side.  This incident was the reason for them to work with widespread axle groups exclusively thereafter.

The new trailers of the type FLA-9-18 (S-Line) are 7,20 m in length and 2,47 m wide.  The BPW air suspension covers three axles with drum brakes, with a technical loading capacity of 9 000 kg per axle.  Both the front axle and the axle group are provided with load regulation to lower the chassis during the transfer of a container.  The front axle of the tandem is provided with a full automatic via EBS axle lift, with the option to turn the system off.

The containers are locked in the front by means of a tension winch with chain and at the back with two ratchet tensioners.  Furthermore there are two detachable stop collars which can be moved into a total of seven different positions for containers between 6 m and 7,5 m long.  Additional extras include an rvs-case, a galvanised spare tire holder including spare tire, a bulb plate above the slewing ring and a smart board to read out the axle loads.

Floor for many years

Baets Trade and Transport has been active for more than 100 years.  Twenty people are employed by the family owned company that is currently run by the fourth generation.  Baets Trade is active in the buying and selling of fourages, petroleum products, fertilisers and a variety of recycling material.  Baets Transport is specialised mainly in the transportation of waste materials and recycling materials in Europe, including shipment in shipping containers.  In Kelpen-Oler they have their own storage and transfer facilities to their disposal, as well as a weighbridge (70 t) and well equipped workshop.

The new trailers are being deployed by Baets Trade and Transport.  The trailers will mainly be deployed for the transportation of containers for bulk scrap, paper and synthetic material from locations in Germany and Belgium.  Marc Baets says that they have been working with Floor trailers since 1969.  When Pacton took over the production from Floor, they automatically became clients of Pacton.  Director Marc Baets explains that it simply is a good product.  His company makes use of nine Floor trailers, pulled by two trucks of the brands Volvo and Scania.  The choice for widespread has been made after the order had been placed.  Pacton made the changes without any problems.  The widespread axle group enables them to safely transport unevenly loaded containers.