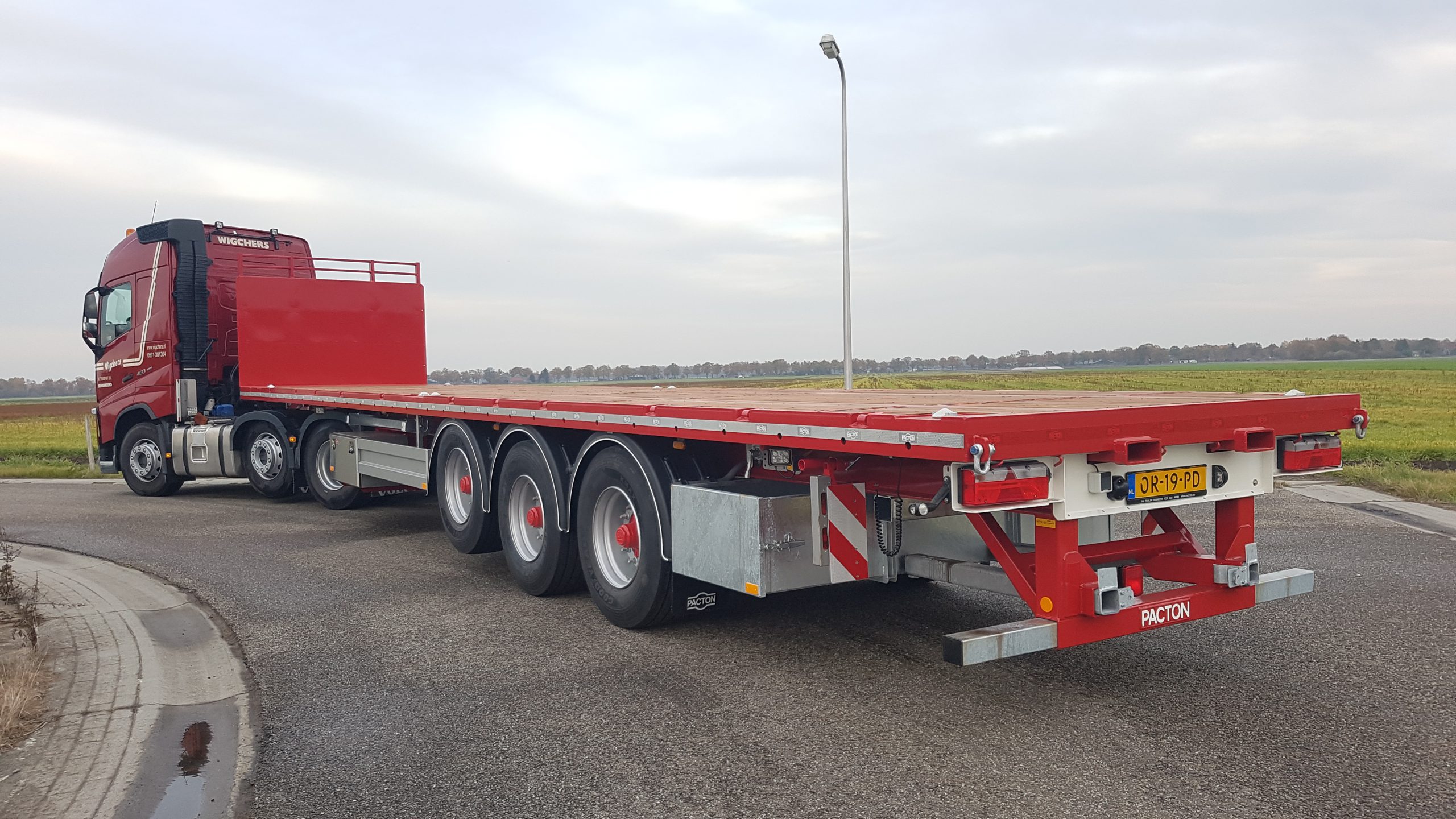 NieuwsWIGCHERS ON A ROLL WITH A RANGE OF PACTON TRAILERS

WIGCHERS ON A ROLL WITH A RANGE OF PACTON TRAILERS

Wigchers International Transport situated in Schoonoord is a dynamic and growing family owned business.  Their fleet has also been expanded on during the last year.  Pacton Trailers in Ommen has recently supplied them with five open semi-trailers, following the five curtainsider trailers and ten open semi-trailers  that have been delivered earlier this year.

Once again Wigchers International Transport has invested in the expansion and rejuvenation of their fleet in 2018.  Besides the 20 above mentioned Pacton semi-trailers, they have for example also invested in 21 new Volvo-trucks.  The 200th Volvo that has been acquired during the last ten years, was among them.  With a fleet counting about 85 trucks and 270 semi-trailers, the transport company is optimally flexible  in a variety of sub-branches within the road transport.  They are specialised in providing transport for the oil and gas industry, construction work, road building and the agricultural sector among others.  The transportation of molten asphalt, crushed asphalt, sand, slag, rubble, earth, soil and contaminated soil are accomplished with the utilisation of approximately 60 tippers.  Due to their own, modern fleet and work shop for maintenance, Wigchers International Transport is considered optimally flexible.  Besides the current fourth generation management of the family owned transport business, namely Hedy Smit-Wigchers, Jaap Wigchers and Aaldert Kuipers, about 100 employees are actively involved in the company operating from Schoonoord.  In addition, they have pitches in Hoogeveen, Coevorden, Emmen and more recently also in Gieten.

The five most recently acquired semi-trailers are Pacton open trailers of the type TXD.345.L-422.  The tri-axial semi-trailers each has a maximum load on the king pin of 18,000 kg, a maximum load on the suspension of 27,000 kg and a gross vehicle weight of 45,000 kg.  The front axle of the BPW EAC air suspension has been fitted with an automatic axle lift.  This also serves to take the weight off the axle as traction help up to to 30 km/h. The semi-trailers are supplied with two Aspock Europoint III multi-chamber rear lights, side lights, integrated lights on rubber support at the rear, width lights in the front and working lamps and all of that with the use of LED technique.  The semi-trailers have been completed with tailor-made accessories such as stainless steel boxes on the left hand sides, open storage boxes to the width of the semi-trailers, 24 fold down lashing rings (TUV-certified for up to eight tonnes) and six rows of stake pockets over the width of the floor.  Furthermore, each has been supplied with galvanized support for stanchions, width marker signs, wheel wedges in plastic holders and a hinged ADR/VLG sign.

Hedy Smit-Wigchers says that they use the open semi-trailers mainly for the transportation of garden wood and other garden material which they transport for one of largest importers in Europe.  The 28 mm shiplapped hardwood floor of each semi-trailer is equipped with eight container twistlocks to accommodate either one 40 ft or two 20 ft containers, making the semi-trailers multifunctional in use.  Wigchers International Transport is above all, a no-nonsense company and they stand for reliability and flexibility.  They expect the same qualities from their suppliers.  They have chosen for Pacton based on their good price-quality ratio.  Due to the wide scope of their activities and their involvement in the oil and gas industry, safety and especially the securing of cargo is of importance.  Smit-Wigchers indicates that a new order has already been placed and that they expect the next five open semi-trailers to be delivered in the beginning of 2019 by Pacton Trailers.